Yes, that's me. Thank you for your kind words about the Cactus. I'm actually hoping I can get the C4P running well enough to handle BASIC for VCF East in less than 2 weeks, to sit at a table with the Cactus. I figure the C4P is a close relative, primarily due to the BASIC in use being identical.

Back on task: M + ENTER is ineffective as far as I can see. The on-screen garbage is not consistent with each power cycle, except I noticed a pattern in the garbage: so far every character I've looked up that I see on screen? The second nibble is 1011, or 0xB.

Previously, I got this months ago when I had just acquired the machine: 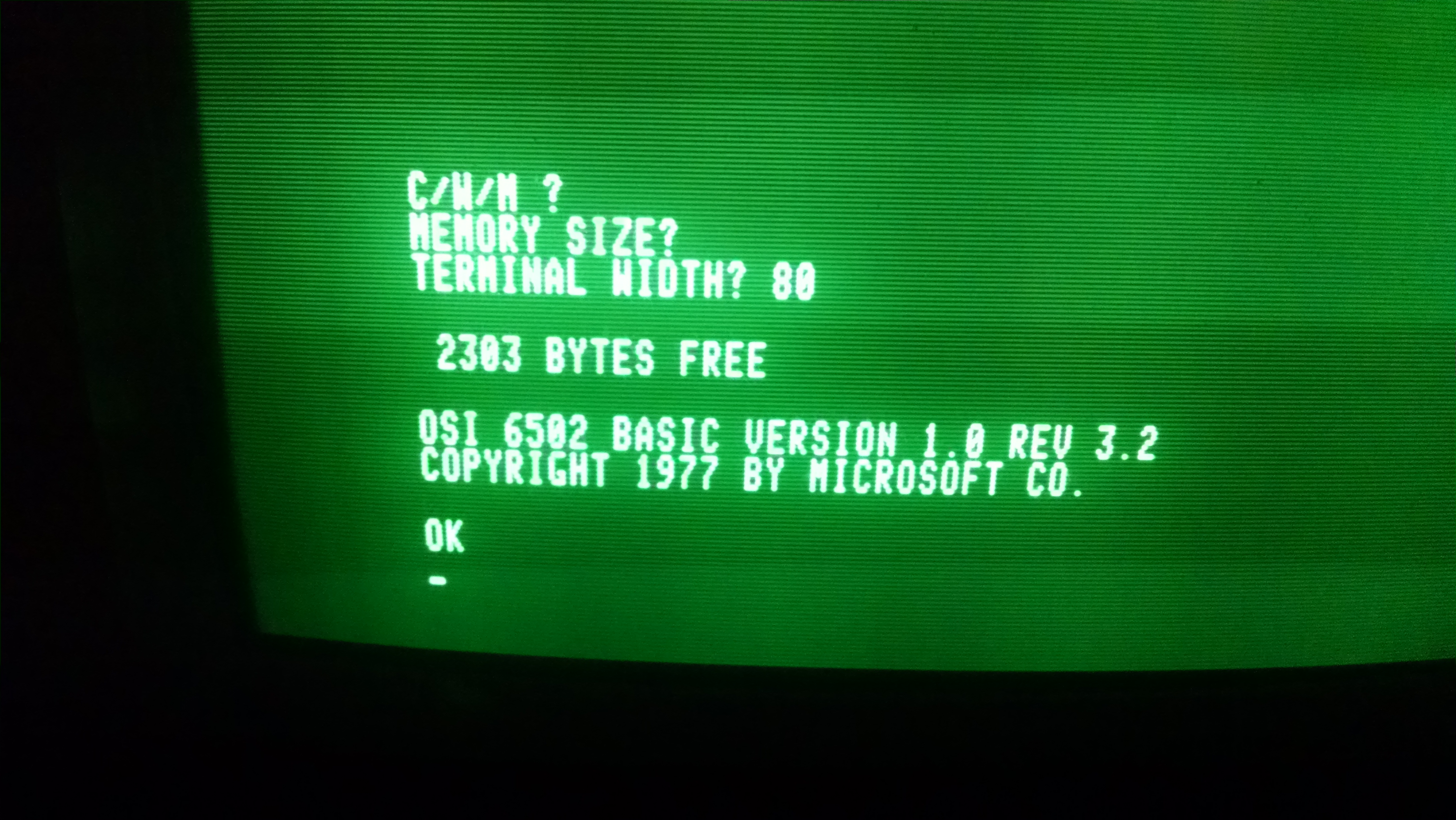 Which indicates to me that the ROMs are still viable.

I'm also noticing that the warmth of some of these RAM chips I've installed seems a bit... toasty. It is entirely possible I got some bogus RAM. Welp, I think it's time I started swapping out pairs until I reach a viable set! So I started pulling RAM chips in pairs, starting at the end farthest from the backplane. I had about 1/3 of it out, when I got a C on screen at RESET.

A few more pairs later, and I got a C/W/M ? prompt. No response beyond it flashing back onto screen, but it's still progress. I'm going to monkey around with RAM until hopefully I have a winning combination.
C4P (502, 540) | Mini OSI-300 | http://www.commodorez.com

not sure if the same holds true with the C4P, but you you have to make sure shift lock is down,
before it will pay attention to any responce to C/W/M. just a thought?

Well, that's promising. Sure enough, Shift or Shift Lock needs to be depressed for it to respond properly. Good suggestion, waltermixxx. I can now get it to hop into the Monitor too!

I've only got 6x 2114's installed right now. I'm going to try adding a few more shortly. I've been told to watch out for the RAM bank selector chips. I haven't checked the schematic lately to know precisely how that's handled, but I'm sure I'll figure it out.

I've got it running some simple BASIC programs, which is great. I've noticed two annoying things while entering programs: the RUB OUT key doesn't seem to do anything expected. I'll check the key response again followed by continuity to wherever it's supposed to lead on the 542 board. The other is that the rightmost shift key doesn't shift things as I figured it would. No idea what's going on there.
C4P (502, 540) | Mini OSI-300 | http://www.commodorez.com

rub out actually doesnt do anything, unless you have replaced your monitor rom with a CEGMON which will allow the rub out to work as one might think.

I'm so glad I was able to help if even just a bit.

(literally a Bit, i think the shift lock holds a bit high or low, i forget.

) at any rate, CTRL-0 I think does a rub out, but if you replace your default monitor with one of the "better ones" you will get more functionality as well as proper editing

I think with the 502board you will need to cut a track and add a jumper etc to get a 2716 to work in the monitor socket.

keep up the progress, and update the thread when ever possible. 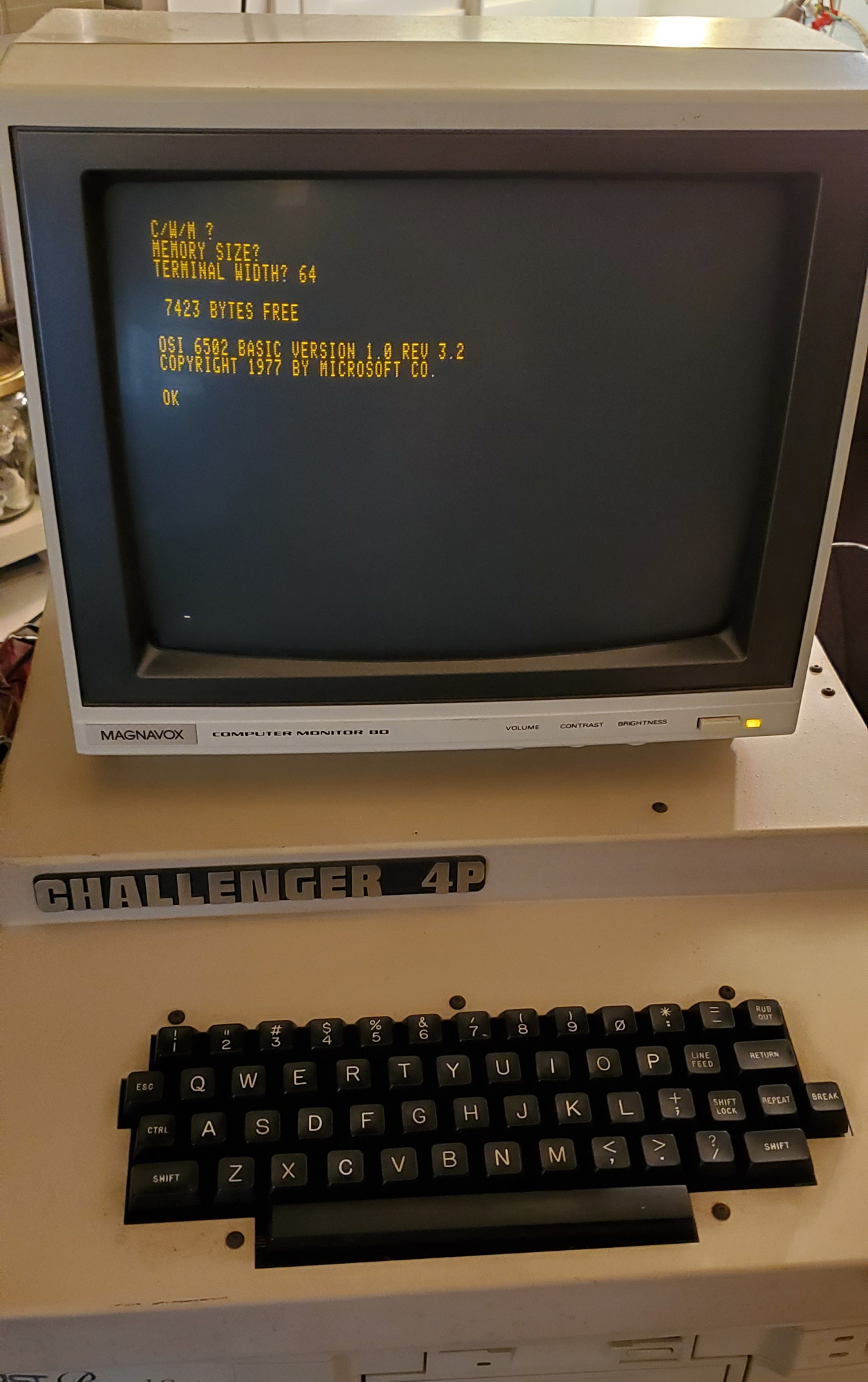 I would call this a win. I went through a bunch of 2114's until I found a combo of 16 chips that would give me a full complement of RAM.

Next, I need to replace the rear panel switches for baud rate selection and serial vs. tape mode, as well as clean up the rear panel wiring mess. Because this is not going to fly. 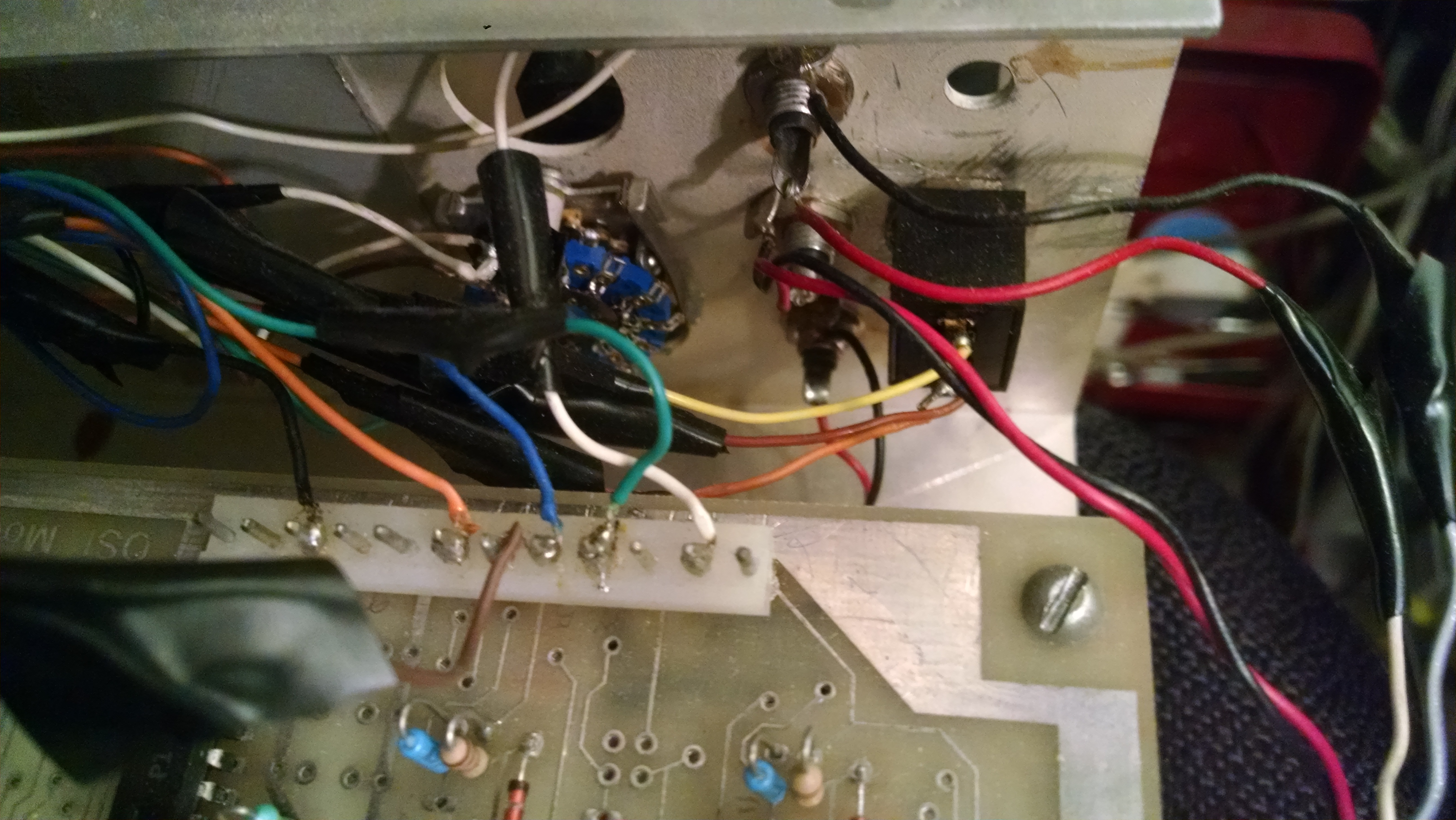 I find it interesting that the C4P can't handle backspace/delete/etc. in BASIC, but serial implementations of this same version allow it no problem.
C4P (502, 540) | Mini OSI-300 | http://www.commodorez.com

I brought my C4P to VCF East this past weekend. It performed admirably, however it got stupid hot a few times. Like, way too hot for me to be comfortable with it, thus we turned it off every so often to give it a rest. It is my intention to add in a fan to the appropriate mounting point on the rear chassis, and it looks like a common 80mm model will fit just fine. Can anyone confirm this?

Bill Sudbrink, a fellow OSI owner (I'm not sure if he's present on this forum) suggested that I replace the old linear supply with a modern switching supply to reduce the heat and increase the amperage when I upgrade the RAM. Sounds like a fine idea to me, but I'm not sure how many amps to go with. I'm open to suggestions for what to look for from those who have made such a change.

Glad to see this one up and living again

You can certainly replace with a modular switcher, the little supplies used in the smaller C*P systems or as the disk supplies in the C2/C3 OEM boxes are not super well built. I personally like Mean-Well supplies if I have to buy new. Lambda modular supplies are nicer but cost a lot more, and it doesn't really matter for these old machines.

If you're going to use my GW-OSI-RAM1, then you don't have to worry about a big increase in power consumption for the RAM. You can also use it to replace the 502's onboard RAM -- TangentDelta is doing that with his reproduction 502 board and my RAM board.

You are probably best off with a 100-150 watt triple voltage switcher, providing +5, +12, and -12. You will have to regulate -12 down to -9 for the backplane, you can do this with a 7909 TO220 regulator on a little piece of perfboard. -9V draw is not particularly high. I may have something in the junk bin if you end up down my way soonish, or you can order a Mean-Well unit from Mouser or Digi-Key or whoever. 100-150W should be overkill for a C4P, especially if you use newer RAM.
Check out The Glitch Works
OSI Challenger 3, 510 CPU, 8" floppies, 74 MB hard disk system in need of restore
Parts bin Challenger 3 board set, never had a chassis in its time
Top
Post Reply
Quick-mod tools
17 posts